It takes much these days to pull the Observational Ginger out of hibernation. A years-long menage-a-trois between powerful evangelical leaders and a 20-year-old kid just might do it, though.

I had dropped into Reuters for my daily pandemic briefing when allegations of Jerry Falwell Jr.’s voyeuristic arrangement with a business partner slapped me across my unsuspecting face. I was accosted with the mental image of Falwell watching his wife in bed with a 20-year-old pool boy.

And I thought Zippergate 2020 was bad.

I can’t say I feel sorry for Falwell. Ol’ Jerry has spent the last four years endorsing a lying serial philanderer while simultaneously demanding perfection from his Liberty University students and hiding behind his own veneer of moral purity—and attending boat parties with his pants unzipped, apparently. Any wonder I was happier than I ought to be when his duplicity caught up to him?

But that’s not the best part of the day, folks, because—and my I have a drumroll for this part?—he also struck a serious blow against the conservative view of gender roles.

I direct your attention to this snippet of the Reuters story:

On Sunday night, however, as Reuters was preparing to publish this article, Jerry Falwell issued a statement to the Washington Examiner in which he said that his wife had had an affair with Granda [the alleged lover] and that Granda had been trying to extort money from the couple over the matter…. In the statement quoted by the Examiner, Falwell said that “Becki had an inappropriate personal relationship with this person, something in which I was not involved.”

Reuters went on to describe screenshots taken by Granda that show a naked Becki FaceTiming Granda while Jerry looks on from behind a door. Reuters also reviewed an audio recording of Granda teasing Becki about his other hookups while Jerry comments “You’re going to make her jealous.”

I suppose, through some weird feat of gymnastics, this could turn out to be “not what it looks like”—Jerry walked in on the naked FaceTime chat by accident? He thought that the word “hookup” being discussed between his wife and Granda was about…um…pirate hands getting caught in coat racks?

But it seems likely that Jerry was involved, especially when you consider he already had a bad-boy reputation amongst his staff.

And if so, then by claiming his wife had an “affair,” he threw her under the bus in an attempt to shift blame off himself. Not only that, he recast himself as a victim and his wife as the one in the wrong.

One of the most high-profile evangelical leaders of the day, who ascribes to a traditional view of gender roles, has just used his supposed position as “servant leader” to make his wife take the fall for a joint mistake and make himself look magnanimous in taking her back.

So much for men being providers and protectors in return for women’s submission.

So much for traditional family values producing the kinds of marriages where husbands care for wives as Christ cares for the church. So much for literally everything in the fifth chapter of Ephesians that complementarians like to quote so much, or for the entire book of Ephesians, for that matter!

So much for reassuring women that if they shrink down and follow their servant-leader-husband, they’ll reap a harmonious life and a doting spouse.

What a glowing review of complementarianism. What a shining example of the harmony produced by men who lead and women who follow.

Now, it’s entirely possible that Becki Falwell was on board with the plan to recast this as her affair. In conservative church circles, “temptation” and “mistakes” are actually less damaging to your image than ongoing sex kinks for threesomes. She may even have wanted to protect Jerry from accusations of homosexuality, since he watched Granda have sex with her—as we learned from Mark Driscoll, even seeing yourself naked in the mirror might count as gay-ness to some conservative minds, and Jerry has a very public “gay is not okay” image to protect.

But even if, even if the “affair” ruse was Becki’s idea and she did it willingly, what kind of “self-sacrificial servant leader” would allow his other half to shoulder all the blame for a mistake that both of them made in full consciousness for six consecutive years? What kind of Christ-like man allows someone else to lie so he doesn’t have to be embarrassed?

And I know it’s all too easy to cherry-pick examples of bad actors and claim that they invalidate an entire theology. On the other hand, are we at all short on examples of the rotten fruit of traditional gender roles?

As if the Southern Baptist Convention, Mark Driscoll, Bill Gothard, Vision Forum, the Duggar family, and the entire Catholic church weren’t enough to prove that patriarchal beliefs can lead to abuse and tragedy, now we’ve added Falwell and his unzipped pants to the docket of evidence.

Do these people ever take a break? Can we go five minutes without another gender-role-induced scandal? I’m setting my watch now. Let’s see how long we make it this time. 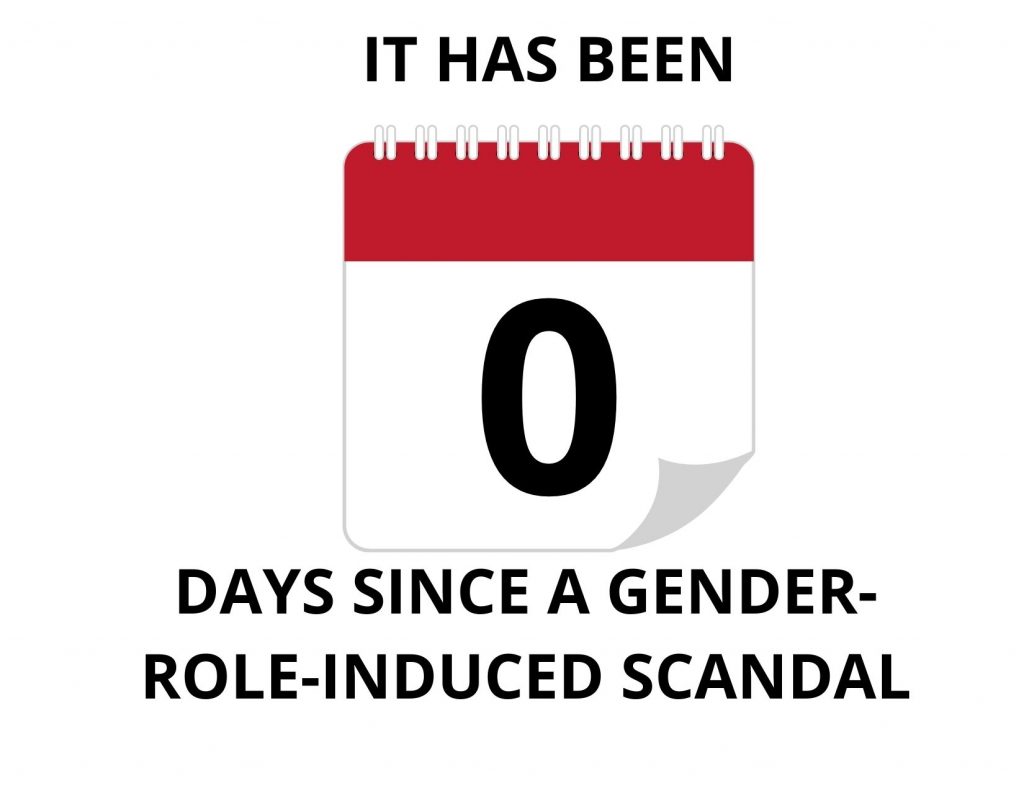