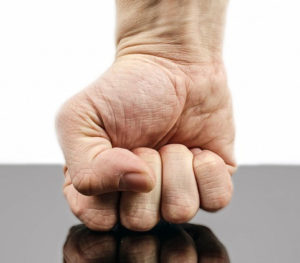 Quite frequently, when the phrase “toxic masculinity” makes its way into the news, I hear some version of this statement:

Quit calling masculinity ‘toxic.’ It makes men feel bad about being masculine, and that harms them.

putting down others to build yourself up

And this is exactly what feminists are getting at.

So if you’re concerned that the “toxic masculinity” discussion is trying to vilify the very nature of men, let me set your mind at ease: it isn’t.

If you’re concerned that feminists who discuss “toxic masculinity” secretly find men repulsive and want to dominate them, let me set your mind at ease: we don’t.

I have a father, husband, and son whom I adore, not to mention tons of guy friends that I would trust with my life. They are the least toxic people I know, and they are all pretty masculine. My father is protective and responsible. My husband is mature and capable and emotionally available. And my son…well, he’s only 10 weeks old, but give him some time to grow into his manliness!

Yet I do believe there’s a toxic and false version of masculinity that many men are tricked into believing–by pop culture, by other men, by the subconscious patriarchy that operates in almost all cultures more than we want to believe it does.

I thought a pop culture object lesson might be apropos here, so real quick, let’s review examples of toxic vs. non-toxic men from popular movies: 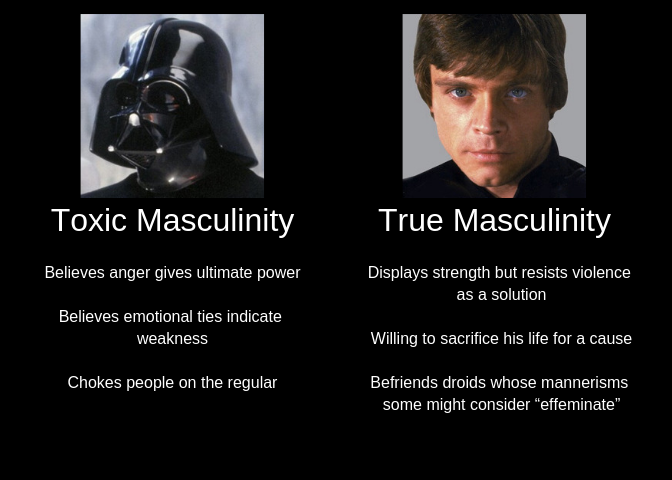 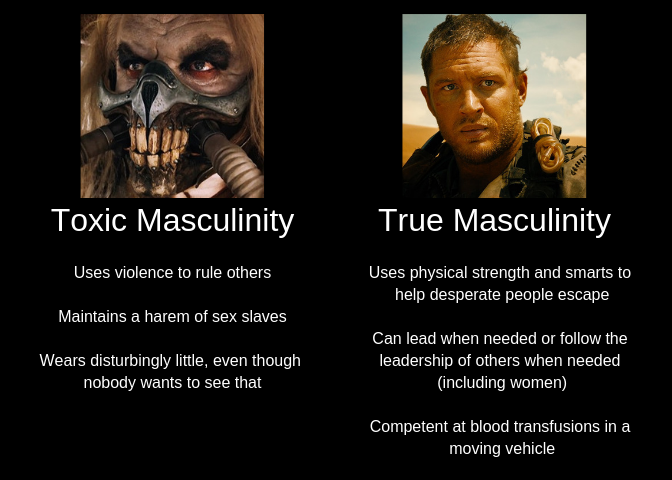 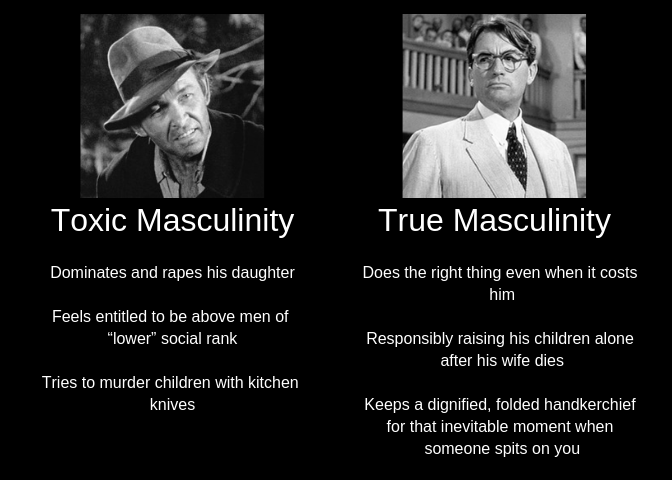 Hopefully by now, you can see that denouncing “toxic masculinity” isn’t an insult to men. In fact, it’s an affirmation that true manhood is incredibly strong and incredibly wonderful and incredibly not-fragile. 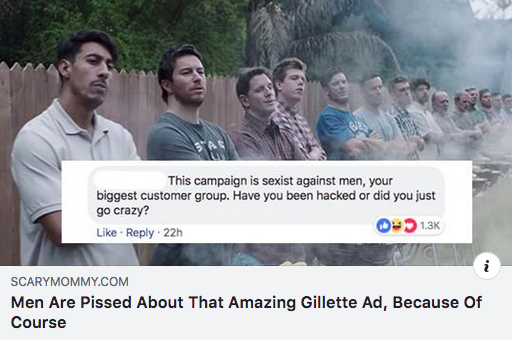 It seems a bunch of fellas got angry when the newest Gillette commercial invited them to stand up against sexual harassment and bullying. The very thought that men might have some responsibility toward women, children, and each other was so insulting that many wounded sirs called for a boycott of the company. 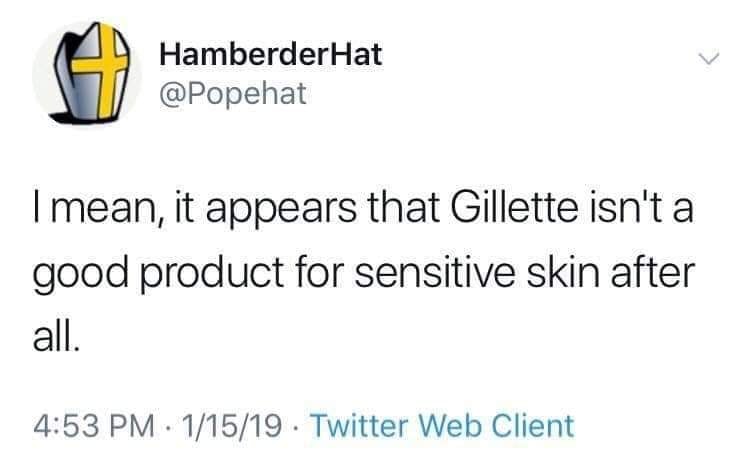 Does it disturb anyone else that men got angry when they were asked to protect people, stand up to bullies, and treat women as equals?

Truly, let’s dwell on this for a moment. The Gillette commercial portrayed two dads making sure that their sons didn’t hurt each other when they got angry. It portrayed a man saving a terrified kid from bullies, and appearing to be a hero in his own son’s eyes. It portrayed guys talking to women as if we have feelings and things to say and lives to lead.

And men claimed that the ad was insulting them.

So…am I to assume, then, that the men who complain about this commercial see themselves as bullies who beat people up, aren’t admired by their children, are too lazy to intervene in the world’s problems, and would just as soon grope a woman as talk to her? I imagine most of those men would (hopefully?) not self-identify as that. But if they don’t, then why are they angry that a commercial tells men not to do those things?

Which person in this conversation is insulting men? The commercial portraying them as potential heroes, or the complainers who don’t think men should ever be asked to exert self-control or lean in to emotions or help solve problems?

The irony here is that the men who understand and affirm that Gillette commercial are ten times the man that the complainers are. Not because the complainers are worthless people who can never measure up, but because the complainers have chosen not to embrace true masculinity. They have voluntarily accepted low standards for themselves, and then blamed other people for noticing how low those standards are and inviting them to something better. They are free to change any time they want. Every person is intrinsically valuable; sadly, not every person chooses to embrace their high value and live accordingly.

I suppose one comfort is that those complainers have done most of the work for us. They’ve shown us a crystal clear picture of how ridiculous and weak toxic masculinity actually is. They’ve hopefully inspired a generation of young men to embrace their value and worth and strength, and not end up looking like a scared grump who won’t accept the responsibilities of being a grown-up citizen.

Now then. If you will excuse me. I’m going back to my sweet son and responsible, emotionally available husband and my awesome dad and the guy friends who patiently put up with my nonsense day after day, because you know what? Truly masculine dudes are super awesome, and I love being around them!

One thought on “BREAKING: Gillette Dares To Assume That Men Are Decent People”